Do you have any to add?

Lawrence Lessig, founder of Rootstrikers: “For remember, we live in a world where the architects of the financial crisis regularly dine at the White House—and where even those brought to “justice” never even have to admit any wrongdoing, let alone be labeled “felons.”

Buddy Roemer: “You want to know who owns America? A few at the top. And they’ve got one thing on their mind. No change. Look at Obama, all that hope and promise. No change. He went to Wall Street, had a fundraiser—$35,800 a ticket—and you know who the host was? Goldman friggin’ Sachs.”

Neil Barofsky, former attorney general for TARP: “The same incentives that led to the 2008 crisis are still in place today and in many ways, the situation is worse. We have a financial system that concentrates risk in just a handful of large institutions, incentives them to take risks, guarantees that they will never be allowed to fail and ensures that the executives will never be held accountable for their actions.”

Aristotle: “A government which is composed of the middle class more nearly approximates to democracy than to oligarchy, and is the safest of the imperfect forms of government.”

Barry Ritholtz, author of Bailout Nation: “The greatest triumph of the banking industry wasn’t ATMS or even depositing a check via the camera of your mobile phone. It was convincing Treasury and Justice Department officials that prosecuting bankers for their crimes would destabilize the global economy.”

John Gastil, professor at Penn State University: “There are two fundamental problems in American politics. The first is that most Americans do not believe that elected officials represent their interests. The second is that they are correct.”

Elizabeth Warren: “If you’re caught with an ounce of cocaine, the chances are good you’re going to jail … Evidently, if you launder nearly a billion dollars for drug cartels and violate our international sanctions, your company pays a fine and you go home and sleep in your own bed at night.”

From Ron Paul’s The Revolution: “There are far more interest groups lobbying in Washington for special benefits and privileges than most Americans can imagine. I do not oppose just this one or that one. I oppose the whole apparatus, the whole immoral system by which we use government to exploit our fellow citizens on behalf of our interests.”

Mike Lux, co-founder of Democracy Partners: “Wall Street is ground zero for the rest of the problems in our economy. And when they screw up in ways that hurt the rest of us, even when they blatantly violate the law, the fact that they are never seriously punished means they have no incentive to stop.”

Michael Lewis, from his book Boomerang: “Extremely smart traders inside Wall Street investment banks devise deeply unfair, diabolically complicated bets, and then send their sales forces out to scour the world for some idiot who will take the other side of those bets.”

Robert Mazur, federal agent who worked as an undercover money launderer: “the only way to stop the flow of this dirty money is to get tough on the bankers who help mask and transfer it around the world.”

Sheila Bair, former FDIC chair: “Even with very good management, these institutions are just too big to manage.” 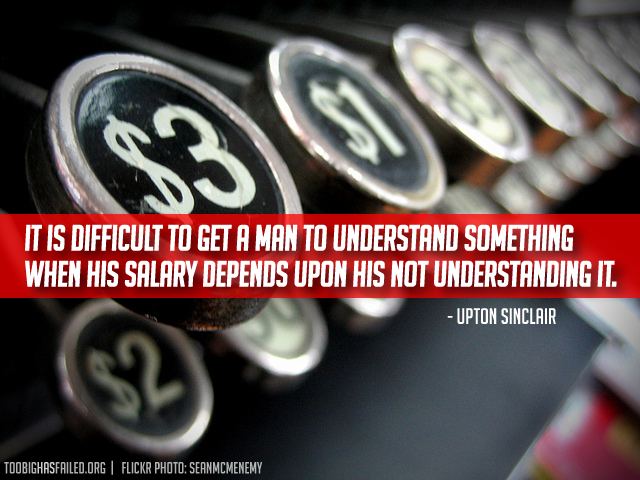 Upton Sinclair: “It is difficult to get a man to understand something when his salary depends upon his not understanding it.”

Charles Ferguson, director of the film Inside Job, has a powerful quote in his book Predator Nation. The full quote is worth showing here. It’s one of the best.

America’s current problems developed over several decades, and they won’t be solved instantly.

In the meantime, Americans can do a number of things, both politically and personally. They can take to the streets; refuse to make political donations to the national party machines; support organizations such as Common Cause, Occupy Wall Street, and the Center for Responsive Politics; run for office themselves; and support candidates who do seem to care. At the personal level, we can save money; place our savings in local banks, credit unions and mutual funds; invest prudently and ethically; and, above all, educate our children.

Earlier I listed the three available avenues: an insurgency within one of the existing political parties; a third party; and a nonpartisan social movement. Any would face tough obstacles, and perhaps some combination of all three will be required. We might get lucky and one day find that America has elected a president who turns out to be deeply committed to fixing America’s problems and willing to take a lot of heat. Time will tell. But America is a remarkable and beautiful country in so many ways. I hope that somewhere in the United States is a courageous young leader in the making, someone who can persuade the American people to rise up and throw the rascals out.

TooBigHasFailed.org is a nonpartisan social movement, urging people to switch to a local lender.