People who bank with local lenders are far more satisfied than those who bank on Wall Street. (source)

Reason #2: The Wall Street Banks Are Still Too Big to Fail

Reason #3: The Wall Street Banks Are Still Too Big to Jail

Reason #4: The Wall Street Banks Are Too Big to Manage

The megabanks have grown tremendously over the past two decades, making it harder for them to properly manage all their various international pieces. 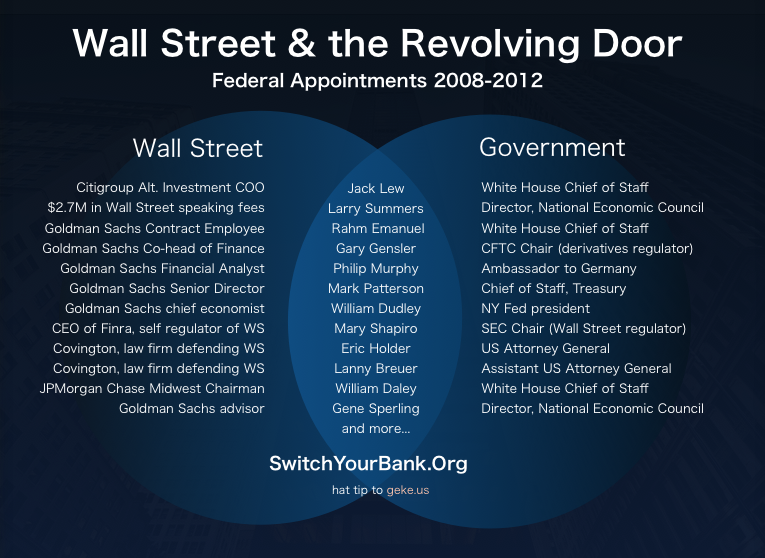 Reason #6: Wall Street Continues To Gamble With the Economy

Gambling on Wall Street lies behind boring, impenetrable names like credit default swaps, synthetic credit derivatives, and mortgage-back securities. All of these bets are types of derivatives. The financial crisis of 2008 occurred largely because these particular derivatives bets went bad. And yet the worldwide derivatives market continues to explode, from under $100 trillion in notional value in 2000 to over $700 trillion in 2011.

Smaller lenders charge less in account fees, overdraft fees, and off-us ATM fees, as shown in a study from the PIRG Education Fund. According to the study, a substantive portion of small lenders belong to ATM networks that don’t charge anything if you use an ATM which doesn’t belong to your financial institution. That’s better than some megabanks offer. 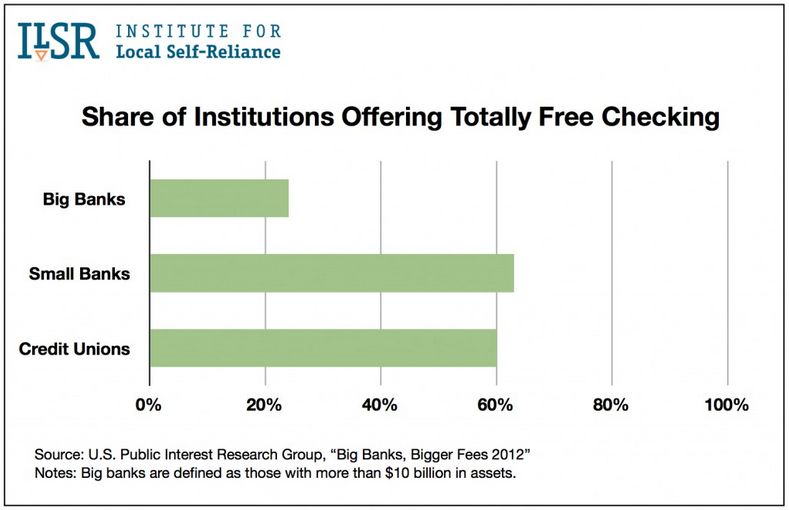 Small financial institutions are more likely to offer totally free checking accounts. No loopholes or snags. Chart from the Institute of Local Self-Reliance.

Reason #9: Small Lenders Are Far Better For Your Community

Local lenders also make nearly 40% of small business loans, even though they only have 10% of total bank assets. (source)

If you want to help end “too big to fail,” if you opposed the megabank bailouts, if you’re tired of megabanks getting away with crime, if you recognize that these institutions have become too big to manage, if you want to ensure that we never repeat the vast injustice at play in the 2008 crisis, then switch your bank.

That’s why, even if you don’t think changing banks will make much difference for the fiscal health of the nation, you should still change banks for many of the personal advantages listed above. Either, way changing banks to a local lender is a good idea.