Home › Break Up the Banks Already

Break Up the Banks Already 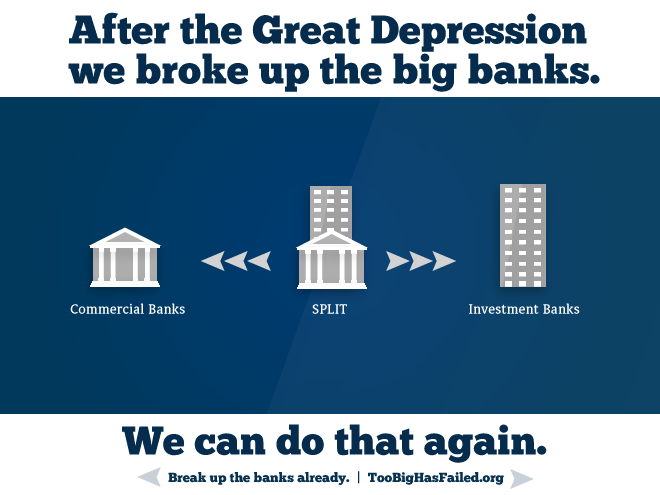 Break up the banks already.

Why is it crucial?

Well, at this point we’re almost prone to think that anything that rankles Wall Street would be nice, but really that’s not a good enough reason.

Breaking up the big banks will:
1. Decentralize their concentrated lobbying power
2. Ensure we won’t be pressured into bailing out bogus banks like Citi ever again
3. End the two-tier justice system that allows criminals at megabanks to avoid prosecution

There are other reasons, of course (ending implicit subsidies, making banks more manageable, etc.), but the 3 reasons above are sufficiently compelling. They argue for a more just economic system, something we desperately need.

But how should we break up the banks?

The process isn’t as important to us as doing it is. What matters is that the break is serious and not merely cosmetic. We could 1) put a hard cap on bank size, relative to GDP, 2) separate investment and commercial banking by reinstating some form of Glass-Steagall, 3) require far higher equity ratios for banks above a certain threshold (or heavily tax the same).

None of these things would completely solve our fiscal problems. They wouldn’t even eliminate the possibility of future financial crises and may even, admittedly, make them more likely. Nassim Taleb says as much in his 2007 book The Black Swan:

The increased concentration among banks seems to have the effect of making financial crisis less likely, but when they happen they are more global in scale and hit us very hard. We have moved from a diversified ecology of small banks, with varied lending policies, to a more homogenous framework of firms that all resemble one another. True, we now have fewer failures, but when they occur… I shiver at the thought. I will rephrase here: we will have fewer but more severe crises.

The point here is that catastrophes like the panic of 2008 are orders of magnitude more devastating to our fiscal health than minor small bank failures, which occur all the time without making national headlines (and without depositors with less than $250,000 in the bank losing any money). Breaking up the megabanks would make financial panics far more manageable and far less worrisome.

Fair enough. But what we’re arguing for is a break up of the megabanks—the 6 US banks with over $600 billion in assets (and especially the 3 with over $2 trillion). We would still have large banks to service large clients. We just wouldn’t have banks that could unquestionably be considered “too big to fail.”

But, the critics respond, we’d lose clients to the megabanks in other countries!

To which we say: if those megabanks lead to billion-dollar bailouts (and they do—see the clip from MIT economist Simon Johnson below), let the other countries have them.

So, break up the banks already. (See our bipartisan list of people who agree that we should.)

0 comments on “Break Up the Banks Already”

4 Pings/Trackbacks for "Break Up the Banks Already"